See What You Think: Thoughts on the Visualization of Thinking – a neurognostics handbook

Proposing: A small illustrated book of poetico-philosophical speculation on the spatiality of thought and on the challenge of visualizing mental processes.

This book will elaborate on the ancient dream of visualizing the mind.  Incorporating visual and conceptual materials from esoteric tradition, art, poetry, science, philosophy and popular visual culture, the book will be presented partly as practical research towards a graphical language for visualizing mental processes, and partly as the hermetic search for a system of living signs that would finally allow the Word (Logos) to take on Flesh, and manifest in visible form.

The task of visualizing thought is in an important sense an impossible one, but the desire is old and persistent, linked to the human longing to grasp the mysteries of the universe and see the principle of cosmic order revealed in bodily form. Placing itself in a tradition of speculative art research that includes Paul Klee, Wassily Kandinsky, Kasimir Malevich, Laszlo Moholy-Nagy and Gyorgy Kepes, this project aims both to communicate the spiritual/philosophical legacy of this search, and to inspire artists, poets and philosophers to carry it forward in an age where new media technologies and new, embodied models of consciousness hold out the promise of truly new revelations.

Highly specialized visualizations, of course, already exist in several disciplines, from neurology with its high-tech imaging capabilities to artificial intelligence with its sophisticated mapping of neural networks, but what is lacking is a more developed vernacular graphics for embodying and communicating the important new models of consciousness and mental experience emerging today. See W hat You Mean is intended as an exploration of the possibilities of such a vernacular.

The book draws on and develops from a period of artistic research and experimentation begun in 1999 under the project title, Neurognostics. In addition to the search for historical and contemporary precedents, the project undertook to develop visualization schemes for several basic mental functions that would be essential building blocks for more comprehensive visualizations. These included abstraction, intentionality, the phenomenological situation, metaphor, hierarchization, and the process of reading. Portions of this project were carried out with the 3D designer Maximiliano Goldschwartz and one phase was conducted under the guidance of Professor David Galen, PhD, of the Langley Porter Institute of Psychology at the University of California, San Francisco. Hans Ulricht Gumbrecht was supervisor of the doctoral research (Stanford Comparative Literature 1995-2004) to which these studies related.

Introduction to the topic by way of instances from literary texts where a poet or lyrically gifted thinker has described thought or the mind in a way so vivid it seems you should really be able to see it, e.g. Robert Duncan, Lyn Hejinian, William James.

Continuing with explicit moments where a poet or thinker has commented explicitly on the possibility of seeing thought or meaning made visible, e.g. Valéry, e.g. Einstein.

Highlighting some of the more extreme (and exaggerated) projects of this sort, e.g. the  “Thought Forms” of 19th Century spiritualism or Kirlian photography.

Some solid philosophic arguments for taking such a project seriously, based on statements of the fundamental spatiality of thought, e.g. Cassirer, James, Lakoff.

Pointing to some resources that would give one a head start on such a project: a) various graphical “lexicons” for expressing abstractions visually (e.g. Malevitsch, Klee, or Kepes), and b) schemes to elaborate comprehensive systems for explaining how mind works (e.g. Buddhist Abhidamma, or Tart’s “States of Consciousness” diagrams)

Example of how to proceed in developing new visualizations, 1: Take structural descriptions from the technical writing of scientists or philosophers, and develop iconic signs to represent the main terms and relations, and test for their ability to support systematic illustration of those writings. Neurognostics case study: abstraction.

The basic challenge for any attempt to visualize mind: develop a visualization scheme for the basic terms and relations of phenomenological theory, e.g. using above procedure; recommended text Don Ihde Experiential Phenomenology; sample solutions from the Neurognostics project.

Fundamental challenge to this project, giving material form to an immaterial “thing”, how to picture a thought; strategies for “dematerializing” the visualization scheme, and for representing indeterminacy, uncertainty, changeability, vagueness and relativity.

9. procedure (2) models from metaphors via abduction

e.g. the word in its universe

2nd recommended procedure, especially useful for poetic and mystical writings: take a persistently recurring metaphor or analogy (e.g. that words are to the world of ideas what elementary particles are to the physical universe), and develop the visualization scheme by elaborating imagery from the source domain (physics) to symbolize aspects of the target (language).

10. the imagewater – interlude on mediality

Fundamental challenge part 2: representing the environment of thought and meaning; further strategies for materializing the immaterial indeterminately; speculations on what kind of stuff the “mind stuff” might really be.

Useful test case for attempting a “comprehensive” visualization of mental processes; the act of reading involves all of conscious experience within the narrowed frame of a fully text-focussed intentionality; demonstrates this comprehensiveness according to four vectors or dimensions of the reading process.

Sample solutions to the challenge of a comprehensive visualization based on reading: the first applying procedure 1 to Wolfgang Iser’s The Act of Reading, the second applying procedure 2 to the recurrent literary metaphor (e.g. Ezra Pound) of the mind as a loom on which the text is woven in reading.

Healthy reminders of the essential impossibility of this undertaking; of the ultimate arbitrariness and partiality of any thinking of thought in a medium other than thought.

Buhnemann and Gudrun: Mandalas and Yantras in the Hindu Tradition, DK, 2007.

Bernard J. Baars:  In the Theater of Consciousnesss: The Workspace of the Mind,  Oxford 1997.

Anthony Damasio:  The Feeling of What Happens: Body and Emotion in the Making of

Mark Johnson:  The Body in the Mind: The Bodily Basis of Meaning, Imagination, and Reason, University of Chicago Press, 1987.

David Gelernter: The Muse in the Machine: Computerizing the Poetry of Human Thought, Free Press, 2002.

Marvin Minsky: The Society of Mind, Simon and Schuster, 1988.

Buckminster Fuller and E.J. Applewhite: Synergetics: Explorations in the Geometry of Thinking, Scribner, 1975.  (Also Synergetics 2 by Fuller, more of the same) 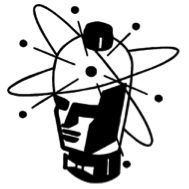 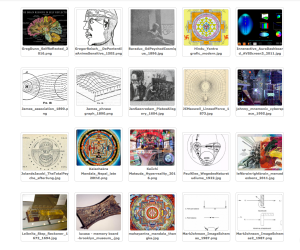 SEEING MEANING – lecture for PhD students at the TaiK MediaLab – 2005 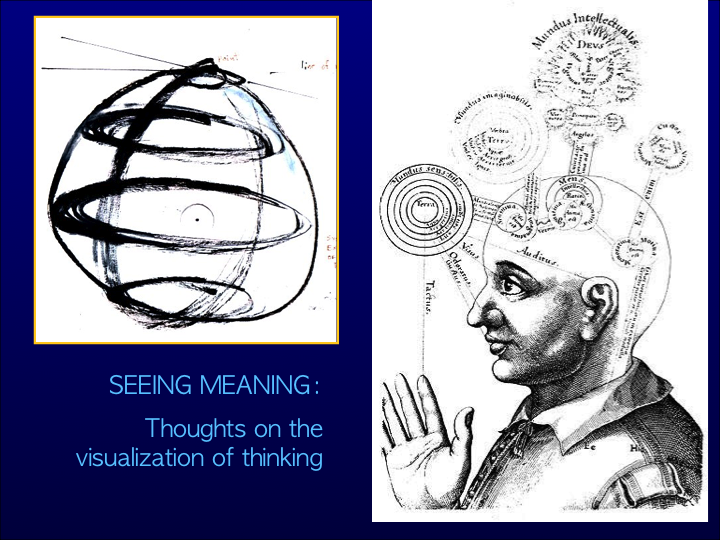 CONSTRUCTING POEISIS Storyboards for an Immersive Diagramming – in INFLEXIONS No.6 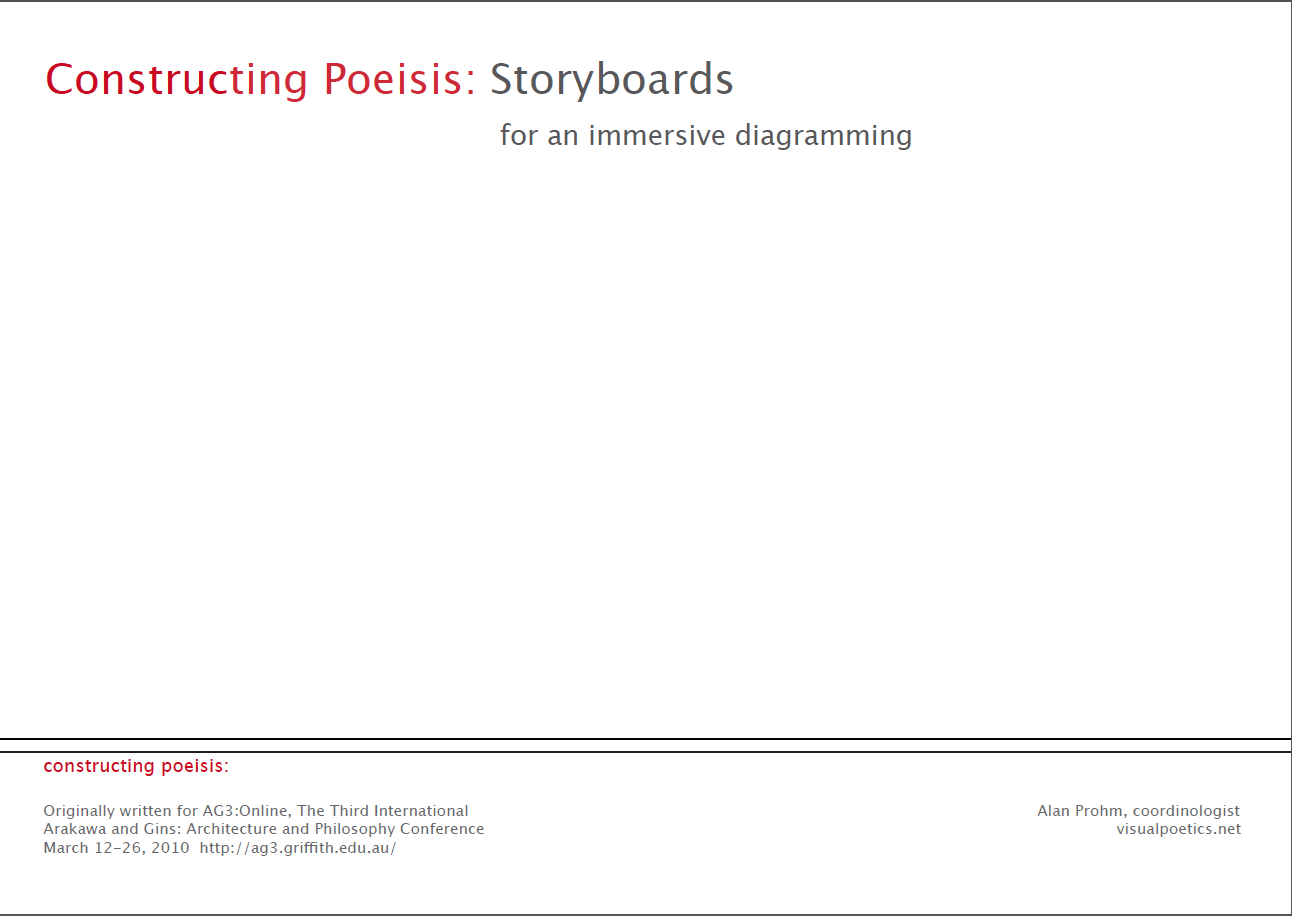 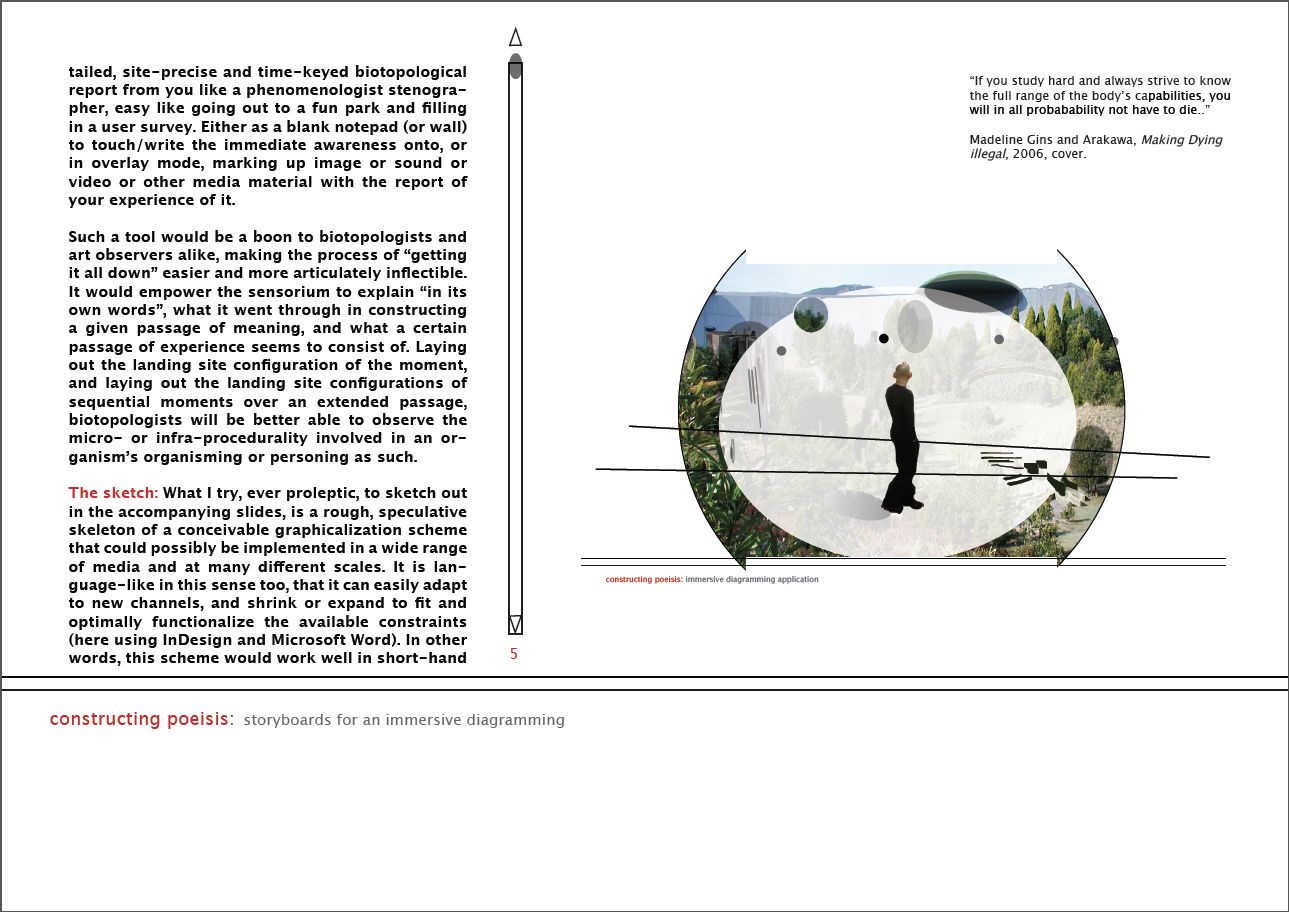 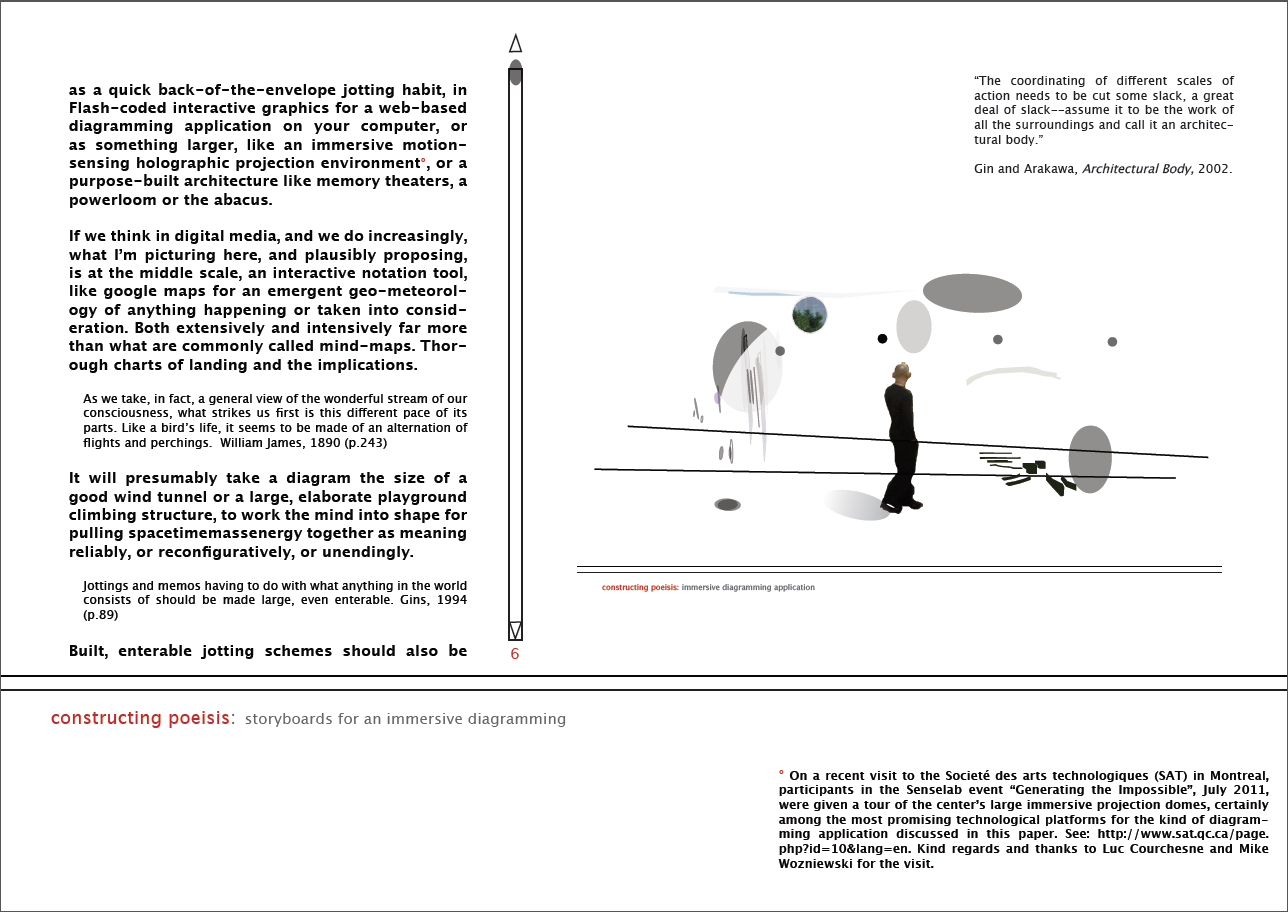 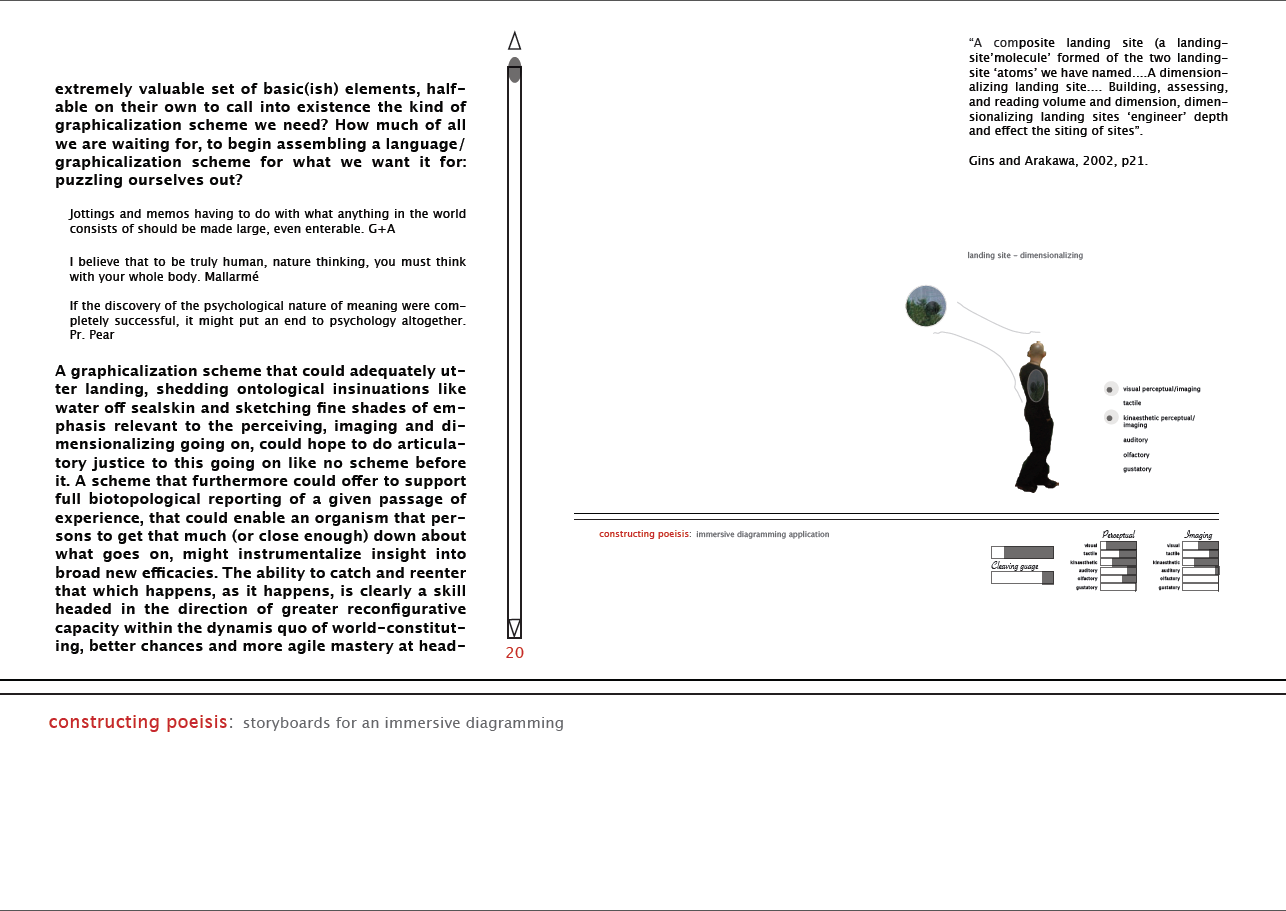